Because SEO is a reactive industry its “principles” are based largely on confirmation bias and groupthink. Sure, Google gives us some guidelines to follow and occasionally releases a public statement but for the most part, SEO is a guessing game. Somewhere along the line the phrase content is king became part of every digital marketer’s rallying cry. The problem is not in the statement itself but rather in how it is perceived and subsequently applied to digital marketing. Many in the industry equate content with word count. Let’s perform a search for what day is it and analyze where sites rank relative to word count.

Now we’ll use the Bulk Word Counter from SEO Review Tools to measure the precise word counts of each first page result.

No conclusions can be drawn from a single search query but this one at least demonstrates a challenge to the conventional wisdoms of the content is king legion. Out of 9 first page results, the top result is 7th in word count and 6th in corrected word count. The corrected count is merely an estimate of words on the page that aren’t filler. Like Kennedy prior to the Bay of Pigs invasion in 1961, SEO experts have failed to acknowledge cases like these because no one else is talking about them and bringing them up in meetings. But what you’re about to learn is that we’re not refuting the importance of content for rankings.

When most people think of content they think about words. But why? Searching for the most contextual definition of content revealed that it is defined by Merriam Webster Dictionary as the principle substance (such as written matter, illustrations, or music) offered by a website. Some might point to the inclusion of written matter within the list of examples to validate their pre-existing bias but the reality is that the need for multiple examples is proof against that ideology. Illustrations and music can be considered content as well, and that is mostly the point. Consider these few notes: 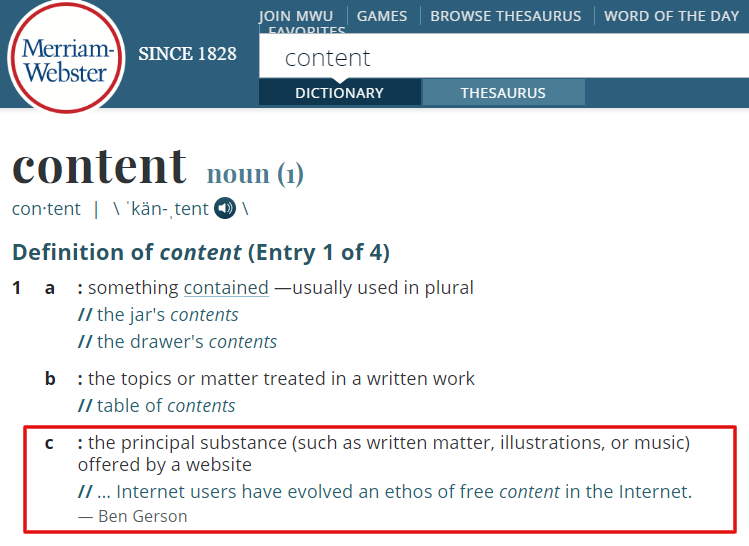 Since SEO as an industry is for profit, salesmanship is inherently present within its marketplace. When you then consider the fact that SEO is a form of marketing it is subject to the same talking points as those used by snake oil salesman and used car dealers. But when SEO is not being used as a marketing chip it can actually lead us to tangible measurements that define trends without an agenda. Users searching for what day is it for example don’t care about word count. What do they care about? They care about what day it is. What the date is. And if it has any significance. Yes, it’s that simple.

How would we know? Google makes the rules and they’re invisible. The only thing we can do as analysts is to test the information we have. The best way to do this is by conducting research experiments. As an SEO firm who has noticed discrepancies between the claims of our competitors and the tangible results on our screens, we decided to test a long held hypothesis that word count doesn’t always translate to results. This singular case demonstrates word count doesn’t mean everything but it does not refute the importance of content. Most importantly, it raises questions that others can then pursue answers to.

Will Google Rank This Page?

This page is 741 words long. Will Google rank it? If you’ve arrived at this page there’s a decent chance that it has ranked for one or more keywords. There’s also a chance that you’ve reached this blog post indirectly. Perhaps you’ve entered from a different web page on this site (most likely the homepage) and then clicked on this post in the blog section. Regardless of who you are and how you got here we would like to thank you for reading this through its duration. We decided not to make this post thousands of words because we know that your attention span simply isn’t that long. And why would it be when there’s lots else to do on the internet then sift through 40 pages about SEO theories?. Still, Google rewarding word count for the sake of it seems unlikely.